It has been a moment since I have last posted an update on this cosplay! My goal was to complete it for 2017 Denver Comic Con, and I was on track until I got extremely sick two weeks before hand. The week after Comicon I picked up a second job which sucked all my extra time away. I did wear what I had ready to the con, and the photos taken of me helped me realize I needed to redo the white tunic pieces, really spend some time redoing the wig.

Our last update concluded with the green top mostly sewn together and lot has transformed since then. I got frustrated with trying to pattern my own pants (I thought basing them on a pair of pants I already own was going to be easy – not so much!) and caved in to the idea of purchasing a pattern. I had never made pants from a pattern before and was very nervous about getting the sizing correct since the largest size, when draped on me, seemed it was too small. The frustration surrounding the size caused an “F it!” moment, and I just sewed everything together according to the pattern anyway. Guess what? The pants ended up being too big, which is very easy to fix. Finally, I have a pair of pants that fit me well and they even have elastic cord sewn in at the waist!

My attention turned next to the white tunic, which I was dreading because I would definitely have to make my own pattern to finish it. The dress form that I made (which you can see in my DIY dressform video) is now inaccurate to my current size due to my losing weight, so the tunic had to be partially draped and patterned on my body while I was wearing it. Just like braiding your own hair on the back of your head, this process consisted of many adjustments and I had a hard time making the right hand side of the garment match the left.

The hardest part was making and sewing in the collar so that it stands on its own like Toph’s does in the show, since most fabric doesn’t normally behave that way. I made this collar out of some wire, foam, and lots of packaging tape, which turned out not too shabby. This “collar boning” is able to hold a circular shape and the effectiveness will lean on how well I sew it in. If I were to sew it in flat, the entire outfit will not sit right on my shoulders. I spent about 10 minutes sewing a length of 1’ making sure that this collar was not shifting and I was dead accurate on the sewing line (sewing on a curved line takes some practice and patience). With a popped collar in place, I was able to start working on the lining to make the tunic look like a real piece of clothing.

The first lining that I had originally sewn into the tunic (which I wore to the con) was crafted with haste and with the wrong fabric. I was desperate to shove the lining into place, tack in some wire around the arm holes for support, sew it all together, and just make it to the con with something presentable. I ended up pulled an all-nighter trying to get it as ready as possible. Wearing the cosplay to the con really told me I needed to change 3 things: a better fit, different lining fabric, and a better solution for shoulder support.

First and foremost was the fit, as it was way too loose and, because I hemmed it too high, it would ride up underneath the belt and expose the green kimono underneath. That seemed easy until I realized that both sides were not exactly symmetrical, so basically I had to repattern on the garment. I couldn’t really start to fix it until I knew where the centerlines were. One of my usual tricks is to put a piece of tape down the middle, determine center, and draw a line on the tape. Unlike chalk, which is commonly used, this method does not rub off and keeps it easily readable until removed. With that centerline dictating where and how to measure and redraft, I was able to nail in place exactly where the sewing lines needed to be, iron everything crisply flat, and fold the edges in with pins.

I was very hesitant to sew in the lining the same way I did before because of how tedious it is to make it not look sloppy. My fears were lifted when I found off-white, gauze-like fabric that stretches. Not only was it cheap and easy to flex in place without altering the shape of the garment, it was lightweight so it could breath easier under Toph’s thick leather belt. Keep in mind that this is entirely the wrong fabric to use for regular lining. However, I knew it was going to work great for my situation.

I had my fabric, but now I had to figure out how was I going to replace the wire to add more support on the shoulders and hide it from the semi-transparent lining. I ended up using foam from Chloe’s Clea cosplay again. I cut two strips a half-inch wide (1.27cm) with tapers at the ends. These were sewn into where the sleeves would attach to the rest of the tunic at the shoulder. I tucked the foam into the folded edge of the outer fabric which hides the black foam entirely. With that taken care of, I watched several episodes of Dice, Camera, Action while tediously pinning in the lining to a desired, clean look.

By then, it was 11 p.m. and I was ready to do the final top stitch to sew both layers together and be done for the night. I realized mid-way that I was running out of thread on the spool and was guessing that it would be really close, but I still should have enough. I was about a foot away (30 cm) from finishing and it seemed I clearly had enough thread left. Wrong! The bobbin actually gave out first, and I was forced to stop.

The next update will have final photos of the sewn pieces and dive into how I made the arm/ankle cuffs and Toph’s lovely belt. Stay tuned! 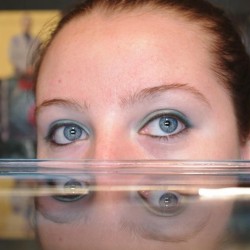 Brianna Hafer is a proficient photographer, graphic designer, aspiring silver/blacksmith, and crafter of various awesome things in many media. As the Master Artisan of the Order, she is responsible for graphics, design, and color management.